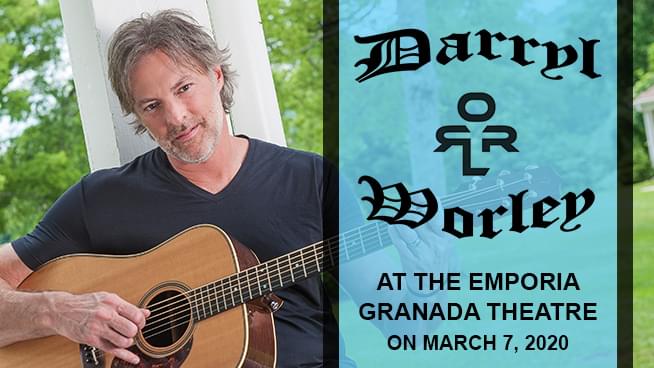 Darryl Worley will be headed to the Emporia Granada Theatre on March 7, 2020, bringing his rich, reedy tones and all-American, blue-collar themes in his #1 hits “I Miss My Friend,” “Awful, Beautiful Life” and “Have You Forgotten?”. A reminder of the down-to-Earth, Haggard-like Darryl Worley you always knew.

The island vibes and blue-eyed soul in new songs “It’s Good To Be Me,” “Lay It On Me” and “Lonely Alone” suggest there’s another, almost-funky, version of Worley that’s been kept under wraps.
The alternate sides are both on display in Second Wind: Latest and Greatest, a project that mixes the traditional-country history he established in Nashville with the ragged soul that’s deep in the bones of Muscle Shoals, a musical Alabama hotbed where Worley got his start. The area hosted hit sessions for Aretha Franklin, Bob Seger, Wilson Pickett and The Rolling Stones, and the sweaty swagger of the region’s recording studios was a perfect fit for Worley as he recorded an album that re-est.